The prestigious recognition as a “Historical Trademark of National Interest” has been awarded to the original Capetta logo by the Italian Ministry of Economic Development. This award is exclusively granted to Italian brands with at least 50 years of continuous production history.

Thanks to the recognition of «Marchio Storico», the Capetta brand is now officially included in the register of historic Italian brands together with important ambassadors of Made in Italy in the world.

The logo: created in the 1950s by Francesco Capetta, founder of the winery, it has been the symbol of our production of Piedmont wines and sparkling wines for decades. A proof of our history, it confirms Capetta as an outstanding wine producer with a strong bond to its territory, as well as a company with a true Italian character and established historical and social importance. 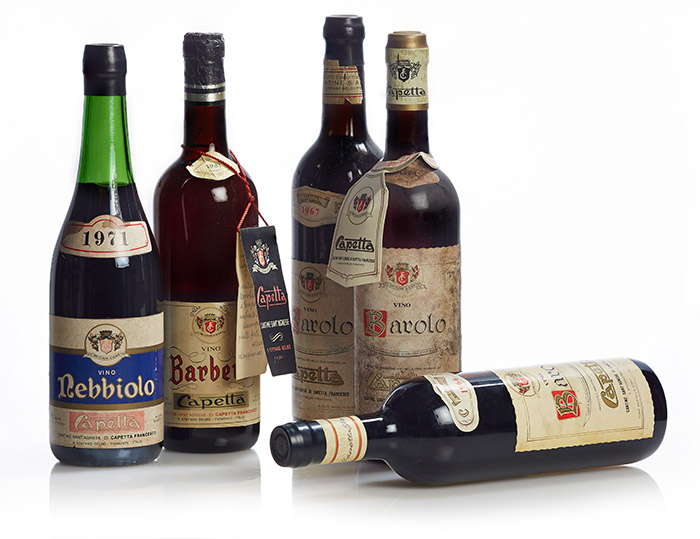 The Spirit of the Langhe

Francesco Capetta was born in Castiglione Tinella. He is the son of peasant farmers who were humble and industrious and for centuries transformed the Langhe into fertile and lush soil through painstaking effort and daily struggle. The Langhe also nurtured in him an entrepreneurial spirit that from an early age would allow him to understand and foresee the transformations that were taking place.
Francesco purchases an old farmhouse just outside of Santo Stefano Belbo. It is the core of what will go on to become the headquarters of the Capetta company.

Under the Family Name

Francesco Capetta begins to sell wine in bulk, demijohns and two-liter bottles.
The company's first modern sparkling wine system is installed. Producing sparkling wine in temperature controlled autoclaves at that time was innovative representing an important step in the pursuit of the best available production technologies. This would become a continuing theme in the Capetta story.

Capetta begins to expand into the markets of Piedmont, Liguria, and Lombardy, creating a widespread sales network. Having started with large bottles, the company begins selling 750ml bottles.
Consumer satisfaction and confidence in Capetta wines grows as do sales. The company consolidates and begins plans to sell its brand through modern distribution channels. It begins in Milan and then expands throughout Italy.

This is the most difficult and traumatic years for the company in Santo Stefano Belbo. Incessant rains swell the Tanaro and its tributaries. On the night of 4-5 November, the Belbo, a tributary of the Tanaro, violently breaks its banks in a manner never before witnessed destroying almost the entire production area and most of the bottles stored in the warehouses. Everything seems lost, but Francesco rolls up his sleeves and calls on the farmers and the producers from all the surrounding hills and within 20 days production begins again.
Capetta expands abroad gaining important positions in Northern Europe, Mexico, the United States, Australia, Japan, Taiwan and South Korea. There are also interesting markets in Africa, such as Kenya and Nigeria.

Capetta continuously invests in technology: the dedicated area has been enlarged and production capacity has been reinforced in order to adequately meet market demand. A thermo-conditioned storage department, with a capacity of 26,000 hectoliters, has been built.
Capetta adheres to the Green Energy program: the entire company is powered by renewable sources with guarantee of origin. Commitment to sustainability is carried out by purchasing crossflow filters that cut the usage of diatomaceous earth. Led lighting is utilized and cooling of refrigerating rooms make use of natural gas, instead of CFC gases that generate greenhouse effect. Working stations are now plastic-free: the staff is encouraged to utilize water dispensers instead of PET bottles in order to produce less waste and cultivate more sustainable habits.

The original Capetta logo is proclaimed as Marchio Storico di interesse nazionale, an award granted by the Italian Ministry of Economic Development to Italian brands with at least 50 years of continuous production history.
Constant investments in technology and modern systems make Capetta a 4.0 company. The bottling lines and regulation of wine vessels have been modernized and equipped with remote-controlled solutions connected to company IT systems that can provide data in real time. New optical systems monitor and inspect caps, bottles and packaging to ensure the safety and quality of bottling procedures.